Bhutan is a small country tucked high up in the Himalayas with unmatched natural beauty and unique Buddhist culture and traditions. Bhutan is the only Buddhist Kingdom in the world. Here Mahayana Buddhism is practiced and is the official religion of Bhutan. Bhutan is considered ‘the world’s happiest country’. It is also popularly known as the ‘the land of the thunder dragon’. Since being a Buddhist nation, there are many monasteries ‘dzong’, Dzong fortresses, temples and shrines all over the country. Top major cities in Bhutan are Paro, Thimphu, Punakha, Gangtey, Bumthang. Paro is the entry point to Bhutan where you can fly to Paro International Airport. fly to Bhutan from usa or any other countries is only from selected cities like Kathmandu, Delhi, Bangkok, Dhaka, Singapore. Fly to Bhutan from India is either from Bagdogra or Delhi, Kolkata. Paro International Airport is the only international airport in Bhutan. The best way to fly to Bhutan is either by ‘Druk Airlines – the national flag carrier’ or ‘Bhutan Airlines – a private company’. Entry point to Bhutan from India by road is from the border town in between Bhutan and India ‘Phuentsholing’.

Paro
Paro is the entry/exit point in/out of Bhutan via air. Paro International airport is the only international airport in Bhutan. Paro has several attractions which are Paro Rinpung Dzong, Kyichu Lhakhang ‘the oldest temple in Bhutan’. The prime highlight of Paro and any Bhutan tour is Taktsang Monastery ‘Tiger’s Nest’ located in the outskirts of Paro town. Hike to Taktsang is the most popular activity and is incomplete if it’s not done during the Bhutan holiday.

Thimphu
Thimphu is the tiny capital of Bhutan which is also popular as the only capital in the world with no traffic lights; all the traffic is controlled by traffic police. Prime attraction of Paro is the majestic Tashichoe Dzong, King’s Memorial Chorten – a monument erected in memory of Bhutan’s third king H.M. Jigme Dorji Wangchuk, Centenary Farmers Market, the new authentic craft bazaar, National Institute of Traditional Medicine that still dispenses traditional herbal medicines to the locals, the Folk Heritage Museum – a 300-year-old traditional house converted into a museum, Buddha’s point.

Punakha Valley
Punakha is a fertile green valley where one can see lush green farmlands and farmers working. Punakha is the old capital of Bhutan. Punakha Dzong in Punakha is arguably one of the most beautiful monasteries in Bhutan. Punakha is reached after driving from Thimphu. En-route Thimphu is Punakah is Dochula pass (3140m) from where spectacular Himalayan views of the eastern mountains can be seen on a clear day. There are 108 chortens atop a hillock at Dochula. Getting closer to Punakha after Dochula is ‘Chimi Lhakhang – the fertility temple’ dedicated to Drukpa Kunley, the patron saint of Bhutan.

Gangtey ‘Phobjikha Valley’
Gangtey is a small village that comes after driving from Punakha via Wangdue. Phojikha Valley in Gangtey is one of the beautiful glacial valleys in Bhutan. ‘Gangtey Nature hike’ is a must-do at the Phobijikha Valley which starts from Gangtey Monastery down to the valley floor. It’s also the winter home of Black Necked Cranes’ which flies all the way from the Tibetan plateau in winter and stays till winter ends in Bhutan. Gangtey Monastery amid Gangtey village is an age-old monastery worth visiting.

Bumthang
Bumthang is the cultural heartland of Bhutan with several age-old monasteries, temples and shrines. Bumthang can be reached after Gangtey via Trongsa. Trongsa is a small high town and it’s prime attraction is Trongsa Dzong. Trongsa Dzong is a monastery fortress which is an enormous Dzong fortress. One can visit many monasteries and temples in Bumthang valley such as Kurje Lhakhang, one of the most sacred places in the kingdom as Bhutan’s “patron saint”, Guru Rinpoche (Padmasambhava) meditated here. Jambey Lhakhang erected by the Tibetan king Songtsen Gampo in the 7th century, is one of the two oldest in Bhutan. Tamshing Lhakhang, founded in 1501 by Pema Lingpa. Jakar Dzong, “the castle of the white bird”. Bumthang is made up of four mountain valleys of Ura, Chumey, Tang and Choekhor.

Taktsang Monastery ‘Tiger’s Nest’
Taktsang Monastery ‘Tiger’s Nest’ is the prime highlight of any Bhutan tour. It is located outskirts of Paro town. It is believed that Guru Padmasambhava landed on the back of a tigress in the 8th century and meditated here, thus the name ‘tiger’s nest’. The monastery is situated at a vertical cliff defying engineering logic. Hike to the monastery begins after a drive from Paro and starting uphill where two hours hike will reach the cafeteria. From here, get a great close up view of the monastery. Then further hike upwards to finally reach the monastery, explore and hike downhill to the road-head then drive back to Paro.

Dochula pass (3140)
Dochula pass is the Himalayan viewpoint en-route Thimphu to Punakha. The pass offers a majestic Himalayan panorama of the eastern mountains on a clear day. There are 108 chortens erected atop a small hill which are known as “Druk Wangyal Chortens” have been built by Ashi Dorji Wangmo Wangchuk, the eldest Queen Mother. There is also another monastery at the pass called the Druk Wangyal Lhakhang (temple), built in honour of the fourth Druk Gyalpo (head of the state of Bhutan).

Paro Rinpung Dzong, Paro
Paro Rinpung Dzong is in Paro town. It’s located about three kilometers from Paro town. It is an example of one of the finest Bhutanese architecture. The dzong is situated on a precarious slope, and the front patio of the authoritative area is 6m higher than the yard of the devout segment. The monastery is also popular to celebrate ‘Paro Tshechu – festival’ attended by the locals and many foreign tourists alike each year.

Buddha’s point, Thimphu
Buddha’s point in Thimphu is an enormous Lord Buddha’s statue. It is located on a small hill closer to Thimphu town and provides a great view of the Thimphu valley. The statue is built celebrating the 60th anniversary of the fourth king Jigme Singye Wangchuck. The statue has over one hundred thousand smaller Buddha statues. The statue is 54 metres (177 ft). Punakha Dzong was the administrative center and the seat of the Government of Bhutan until 1955 when the capital was moved to Thimphu. The monastery is listed as a tentative site in Bhutan’s Tentative List for UNESCO inclusion. 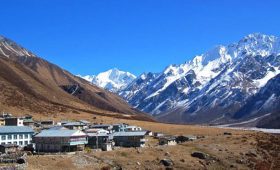