Upper Mustang located in the north-central remote region of Nepal sharing it’s border with Tibet is an exotic place to visit in Nepal. Mustang region has it’s own typical beauty not similar to other trekking regions of Nepal. The land is bestowed with the most desolate captivating landscape and traditional different cultures mainly influenced by Tibetan Buddhism. Mustang was off-limits to foreigners for decades and was open for a visit only two decades ago. So, it’s a bit of ‘Shangri-la’ for the outside world. And so it’s also considered as ‘The Forbidden City’ or ‘Little Tibet’. upper mustang trek itinerary takes you to isolated valleys, age-old villages, exquisite trails and natural vegetation. The landscapes of Mustang are a deserted land so gives you feels like you are in a desert in the high Himalayas. Upper Mustang trekking’s important highlight is the visit to the walled city of Lo-Manthang. Lo-Mathhang is the capital of Mustang where once kings ruled the Mustang region. The city is a fascinating place to visit with high walls guarding the city with several ancient Buddhist monasteries, traditional houses where time has stood still for centuries. One can go for a side-excursion from Lo-Manthang to ancient caves perched in high mountain cliffs where archeologists are still researching when was it built and who carved these caves in such high cliffs.

Upper mustang trek route map follows first arriving in Pokhara from Kathmandu then taking a trans-Himalayan flight out to Jomsom. Trek begins once you land at Jomsom airport and ascending up to Kagbeni. Upper Mustang trekking itinerary then passing along several mountain villages like Chele (3100m), Geling (3570m), Tsarang (3560m) and finally arriving at the capital Lo Manthang (3840m). The trek is past Kali Gandaki, one of the deepest valleys on earth until reaching Lo-Manthang. Trekkers also get to witness the rarest species of birds and animals including spectacular Himalayan panoramas. Upper mustang trek difficulty is a moderately graded trek which anyone with good physical fitness can achieve. Upper mustang trek best time is February to November. That means trek to Mustang can also be done during monsoon season (Jun-Aug) since the region of Mustang is located at the rain-shadow area of Nepal so receives less rainfall than other regions of Nepal. Upper Mustang is considered as the remote and restricted trekking area of Nepal, so a special permit of US$500 per person to visit the region is required which adds up to Upper Mustang trek cost. This makes Upper Mustang trekking permit one of the expensive trek permits in Nepal. 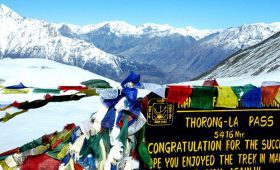 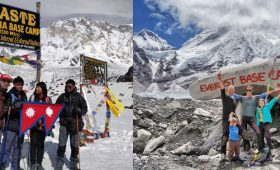 Everest base camp vs Annapurna base camp 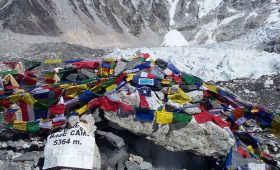 15 Interesting things to do during Everest Base Camp Trek