With over 25 million Nepal’s population about 80 percent of the population are Hindu. The rest of the remaining percentage is around 10 percent are Buddhist, 4.5 percent Muslim, and only 1.5 percent Christian. But still, Christmas is being celebrated in urban areas like Kathmandu, Pokhara and other major cities in Nepal.

Is Christmas a public holiday in Nepal?
From 2008 until 2016, the government has declared a Christmas holiday in Nepal. In fact, the Nepalese government recognizes dozens of holidays and the sheer number of off-work days was the reason given for disestablishing Christmas’ public-holiday status in 2016. Christians in the country have protested, suspecting discrimination.

Christmas in Nepal Kathmandu can be hugely seen at the more tourist area like Thamel in Kathmandu. restaurants in Thamel Nepal on Christmas day will be packed with Nepalese and tourists alike with live musical shows, food and drinks. In fact the entire Thamel area will be jam-packed with Christmas celebrating crowd. There will also be a Christmas offer in Nepal with many shops in Thamel Kathmandu at discounted prices on various items like clothes, trekking gear etc. Another great spot to celebrate Christmas is the other most popular tourist destination in Nepal ‘Pokhara City’. Pokhara is the beautiful lakeside town of Nepal and the lakeside area in Pokhara has abundant restaurants, pubs and eateries where Christmas is celebrated in full swing. Christmas in Nepal can also be seen in the big malls and shopping centers of Nepal. One of these days one can also buy a Christmas tree in Nepal.

If one isn’t into crowds and prefers quiet and serene to celebrate Christmas then Christmas trek Nepal is also up for grabs. Celebrating Christmas in the high Himalayas is a different experience at the cozy little mountain lodges with a bonfire and spectacular Himalayan views. December is the winter season in Nepal, so most of the high Himalayan routes are snow-bound and the mountain passes being closed due to snow. Even though one can go for lower altitude Christmas treks in Nepal at top trekking routes in Nepal like Everest, Annapurna or Langtang regions. Overall, Christmas in Nepal is a very different experience celebrated in your hometown and will be a good memory of a lifetime. 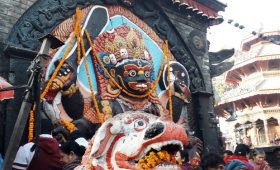 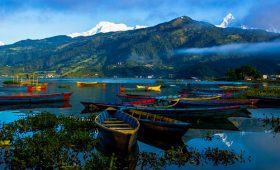