Everest base camp or Annapurna base camp. If you are planning a trek to Nepal and wondering which of these treks is better and good to go. Both of these treks are hard to compare as they both have similarities but at the same time some contrasting features. First of all both treks are amazingly great so you can opt for both of the treks. However, if you are planning to choose only one then this article will certainly help you. If you are worried about altitude, scared of flying small planes and colder temperature isn’t for you then Annapurna Base Camp can be a better option. But if you wish to see some of the world’s tallest peaks including Mt. Everest, walk the world’s highest hiking trail then Everest Base Camp is a good choice. However, at the end of the day, they both deserve to be included in a list of the world’s greatest treks.

Getting into Annapurna is easy where the beautiful lakeside city of Nepal ‘Pokhara’ is the entrance to the Annapurna region. Pokhara is 6-7 hours drive or 20 minutes flight from Kathmandu. Daily bus and flights operate in between Kathmandu and Pokhara. Alternatively, you can hire a private vehicle for the Kathmandu Pokhara drive as well.

Trekking Terrain
Annapurna Base Camp is one of the best and most popular treks in the Annapurna region. The trek is past lowland villages to glaciers and offers spectacular Himalayan panoramas. The trekking trails are good paths where you walk about 4-6 hours every day taking rest and acclimatizing. There are fewer steep climbs and the descents are gentler which is good for the knees in the long run. The highest point is Annapurna Base Camp (4100 meters) where you will be surrounded by snow-capped peaks all around.

Everest Base Camp is the most popular trek in the world with majestic views of the Himalayas and is a legendry trail. The trek is through deep river gorges and forests, ascend high ridges. You will visit Namche Bazaar the gateway to Khumbu. Also, witness the culture and traditions of the famous Sherpa community. Plus visit high Himalayan Buddhist monasteries. Your trekking is on Everest National Park with varied flora and faunas and it’s also the UNESCO World Heritage Site. Finally, you get to the Everest Base Camp which is the dream of many trekkers to attended the base of the world’s highest peak Mt. Everest.

The Scenery
Annapurna region landscape is the fertile lower lands of the Himalayas. The trekking is through many rice fields, oak & rhododendron forests as you ascend. Trekking during spring you will witness rhododendron in full bloom which is simply colorful. The Annapurna region is much wetter than the Everest region. You’ll be walking through more forests and farms and more into a lush green environment. Observe Mt. Machhapuchhre and Mt. Dhaulagiri including Annapurna ranges.

Everest Base Camp fascinates trekkers with it’s awesome sceneries all through the trek. Get mesmerized with dazzling glaciers, ancient monasteries, and charming Sherpa people, their culture and traditions. Getting closer to the base camp you will be surrounded by the mountains towering just above you. The prime highlight of the trek is attending the base camp of the highest peak in the world. The popular Himalayan viewpoint ‘Kalapathar ((5550 meters)’ provides a closer view of Mt. Everest and other world’s highest peaks.

The communities
Trekking in the Annapurna is past different communities’ high mountain villages. Firstly, you will hike through lowland farming villages of the Brahmin and Chhetri people. Then comes the village of Ghandruk which main inhabitants are the Gurung community. Also along the trail comes colorful villages inhabited by Magars and Thakali people. So, basically, you will witness Hinduism and Buddhism, especially at lower altitudes.

The prime inhabitants of the Everest region are the Sherpa community. They are famous around the world for their mountaineering skills and good attitudes. So, naturally, you will witness their culture and traditions. Their main religion is Buddhism thus you will visit many age-old Buddhis monasteries, walk past ancient Mani Walls and Chorten which are scattered throughout the Everest Base Camp trail.

Accommodation
Both of the treks have the same kind of accommodation facilities. Yet, there is the biggest difference in the bathrooms/toilets. Everest trial has mostly a shared toilet, especially at the lower elevation. Whereas on the Annapurna, you will get this in Manang only. Even when you choose the attached bathroom on the Everest trek will have a shared bathroom in an interior corridor. Western toilets are normal on Everest, while you might only come across one or two on the Annapurna Base Camp.

Food and Drinks
Food and Drinks are also equally the same quality on Everest or Annapurna. The taste of the foods can not be the same as in cities like Kathmandu or Pokhara. It’s due to remoteness and food supplies not easy to access. However, one can still enjoy different cuisine of Nepali, Tibetan, Continental, and Indian. Usually, breakfast contains Tibetan bread, Porridge, oatmeal, boiled eggs, pancakes. Lunch will be the traditional Nepalese food Dal Bhat. But you can also have noodle soup, steaks, momo, pizza, and the sandwich from the menu. Dinner is usually in the teahouses where you’ll stay overnight. The menu is the same as the lunch menu. You can choose garlic soup also to help to diminish altitude sickness. The tea house in the Annapurna trail also serves the same food menu. The varieties of foods in Annapurna will be at a lower price compared to the Everest region.

Difficulty Level
The trek to Everest Base Camp is more challenging than the Annapurna Base Camp trek. The major factor is altitude. With increasing altitude, there is a high chance of altitude sickness. You will reach 3,420 meters above sea level in the two days on the Everest Base Camp trek. Whereas you reach this altitude on day six on the Annapurna Base Camp. But, for both of these treks, you need to be physically fit. To accomplish both of the treks you don’t need any professional training. You can go for basic training like jogging, running, or any other cardio exercise. ultimately This will help you to build stamina while trekking and to easily trek in a short period of time.

Price
It’s more affordable from the starting point of the trek in the Annapurna region. The price of food and accommodations is reasonable. The transportation cost is also less. Everest Base Camp trek costs more than Annapurna for several reasons: higher elevation, it’s a bit more luxurious and Everest has a bigger brand name. The flight ticket also adds extra cost to the EBC trek. For the budget traveler’s Annapurna Base Camp might be a good alternative.

Crowds
In fact, it’s hard to compare the trekking crowds on both of the treks. It actually depends upon the trekking season where pleasant weather invites more trekkers. EBC trek is normally more crowded where large groups are common. For the EBC trek, you can do it at the beginning of the seasons in order to avoid crowds. The Annapurna Base Camp commonly has hikers in pairs of small groups. Annapurna is less crowded during offseason.

Best Time
Autumn is the best time for the Annapurna Base Camp trek when the monsoon ends. Monsoon clears all dust and pollution making the views of the Himalayas spectacular. the weather conditions are also neither too hot nor too cold and very favorable. ABC trek in early spring before the monsoon starts is another good time to go. At this time, colorful rhododendron and others flowers are in bloom which makes trekking more enjoyable and beautiful.

October and November is The best time for the EBC trek. During this time of the year, the weather is the most pleasant and there is a better chance of clear skies so the best Himalayan panorama.

Conclusion
Both Annapurna and Everest Base Camp trek offers more than enough opportunity to explore the most popular Himalayan destinations. You need to pre-plan everything and decide which fits with your schedule, budget, and style of trekking. Don’t choose a trek because it is easy or moderate. As all kind of treks in the Himalayas requires physical preparation, even those labeled easy. 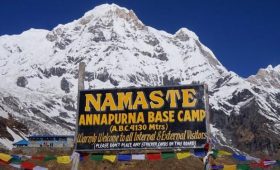 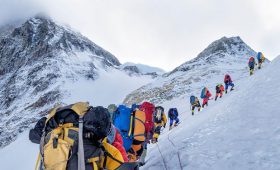