Today is the happiest day for this Himalayan nation as the very first constitution written exclusively by the people, for the people and to the people is soon going to be released on this day, 20th September 2015. This constitution was in process of writing for more than 5 years and even the constitution assembly was dissolved after failure. But later on it was again restored after a successful election. Now all the involved parties and those who are concerned have come in terms of agreement regarding some issues which wasn’t unacceptable previously, and finally today the constitution of the people will be released. The whole Nepalese have been awaiting this day for a long time and this constitution, and it really is the day to celebrate for the entire nation. In the coming days and after the release of the constitution, all the Nepalese expect their country to proceed towards prosperity with a stable political scenario.
All the sectors who are the sole responsible for the development of any nation such as industries, business houses, education institutions including ‘we’ the tourism professionals have seen this in a very positive way and trust that it will bring a positive change in the country, and Nepal will be seeing more happy days and set an example in the global community after a decade of turmoil and civic unrest in the past. Today at 5 PM the country’s president Mr. Ram Baran Yadav will announce the release of the ‘Nepal’s constitution – 2072’ from the Parliament House at New Baneshwor, Kathmandu. The Parliament House at New Baneshwor is in full preparation to host this ceremony. 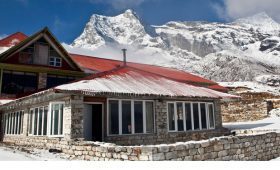