What to know before visiting Nepal- Nepal is a beautiful country tucked high up in the Himalayas located in South Asia. It’s a small country in between the giants’ China and India. People who are familiar with the beauty of Nepal wished to visit the country again and again. Nepal is fascinating for any outsiders due to it’s natural beauty, unique culture and not to forget the Mighty Himalayas. Nepal is the land of the Himalayas and home to the world’s highest mountain Mt. Everest. Mountaineers from around the world come to Nepal to climb the highest peak on earth every year. Besides mountaineering in Nepal, there exits the best opportunity for trekking in Nepal at it’s high Himalayan amazing trails. Nepal is also the birthplace of Lord Buddha thus an important pilgrim place for all Buddhist including tourists from around the world. The below are the essential things if you knew prior to your visit to Nepal which will make your journey even more fruitful and interesting.

Getting Nepal visa on arrival
Getting Nepal visa is easy which can be obtained upon arrival in Kathmandu by flight at Tribhuvan International Airport in Kathmandu. Nepal visa can be issued for 15, 30 and 90 days. Visa fee for Nepal as per days respectively is US$30, US$50 and US$125 per person. Visa fee needs to be paid in cash and all forms of major currency are accepted. Make sure to have a change of the exact visa fee to make the process faster. There are also ATM machines to withdraw money.

Language in Nepal Kathmandu
The official and the first So language in Nepal is Nepali which is written in Devanagari script. So Indian tourists have less difficulty understanding a bit Nepali language. English is the secondary language understood in all major cities. Outside cities, English is less spoken but everyone is willing to help so it’s manageable to get around.

2015 Nepal earthquake effects
Nepal was struck by a huge earthquake of 7.8 magnitudes in 2015 which shook the whole country. It destroyed roads, homes and ancient historical sites. Several UNESCO World Heritage Sites like in Kathmandu and Bhaktapur were badly damaged. Restoration is still going on and you can see rubble and wood beam supports on building structures to hold it up. But most of the temples, palaces, Buddhist stupas are still standing like Swayambhunath ‘Monkey Temple’, Boudhanath Stupa where only partial damage is being done.

Blackouts in Nepal
Nepal used to have regular blackouts due to no electricity in the past. During this time all residential homes, hotels will use alternative power like generators, inverters to keep things going. At present time, such is not the case and Nepal Electricity Authority (NEA) has turned on the lights, making blackouts a thing of the past. All the happening areas like markets, tourist areas are all bright with lights on but some roads even in cities can be darker due to no street light. During trekking trips or remote areas, you are suggested to take a flashlight or headlamp.

Squat toilet Nepal
All the tourist hotels or restaurants have western-style toilets. Even modern residential homes use westernized toilets now. But in the village areas or during treks, there can be squat toilets. Public restrooms might also have squat toilets. Remember to always pack a packet of tissue and hand sanitizer.

Can you drink the water in Nepal
Drinking water directly from tap highly not recommended in Nepal since it is not filtered or purified. Though you can boil the water for drinking. Alternatively, you can buy bottled water which is relatively inexpensive. Fruits or veggies washed in tap water should be avoided. During the trek, you can use backup water filtration solutions like purification tablets or pens.

Traveling by Bus in Kathmandu
Traveling by Bus in Kathmandu is an interesting travel experience and tricky at times. All the destination signs on buses or public transportations are written in Nepali language and all bus stops might not have bus stop signs. Fare is collected by a fare collector when he approaches you. But traveling outside Kathmandu to other cities like Pokhara or Chitwan by bus is well managed with a/c tourist coaches operating in these cities.

Shopping in Kathmandu Nepal
Shopping in Kathmandu is a shopper’s paradise since you can find almost all items at cheaper prices if compared globally. One can find copies of high brands like North Face at the most cheaper rates. Tourist areas like Thamel and in Pokhara, such stores are all lined up to serve any needs of the travelers. Besides, high-rise malls in Kathmandu have all the fancy items which can be a bit expensive than at the items you get in tourist spots.

Roads, Dust & Face masks
Roads in the urban areas can be dusty with potholes and a bumpy ride. Major highways in Nepal are in good condition but still, construction work can be going on here and there. Even in Kathmandu dust can be a problem due to road conditions and wearing a face mask is suggested.

Eating in Kathmandu Nepal
One can find all the major cuisines of the world in Kathmandu or Pokhara at it’s many restaurants, pubs, eating joints, eateries. These go from continental to Mexican, Thai, Korean, Indian. Thamel serves to such travelers where all the major restaurants and pubs are located. Nepali Authentic restaurants offer Nepali meals of rice, lentil, veggies and meat. They also have a Nepali cultural show with Nepali typical dance performers while you dine.

How to get Nepal SIM card
A good suggestion while getting Nepal SIM card is upon your arrival at the Kathmandu airport. SIM card can be acquired at the help-desk outside the airport after you check-out from the airport getting your luggage and Nepal visa. All you need is your passport photocopy and SIM plans are also inexpensive.

Street food in Kathmandu Nepal
Street food is available everywhere in Kathmandu city. But street food in Nepal can lead to stomach issues even for the bold travelers. Food on the streets isn’t always refrigerated and food can be reused after a day of being out. Sticking with the tourist restaurants and food joints are recommended.

Daily cost of traveling Nepal
The cost of traveling in Nepal is relatively low if compared to other parts of the world. Nepal is a relatively inexpensive tourist destination. Converting US dollars into Nepali rupees is Rs. 117 for 1 US Dollars currently but this rate goes up and down. Thus foreign tourists will find Nepal cheaper to travel as well as the cost of hotels, eating out less expensive. In fact, the flights to Nepal come more expensive if compared to traveling in and around in Nepal at some points.

How to greet in Nepali
The first greeting you hear while in Nepal is ‘Namaste’ which means Hello. You fold your hands into prayer while greeting ‘Namaste’. Another word is ‘dahn-ya-vahd’ which means Thank you.

Dal Bhat power 24 hour
It is a humorous Nepali saying which can be heard around town or see on printed t-shirts. This simply means Nepal’s love for daal bhat which is a yellow lentil soup with rice and veggies or meat. Nepalese have daal bhat two times a day and that simple dish can keep one strong and sustained through the day.

Which place is known as switzerland of Nepal? 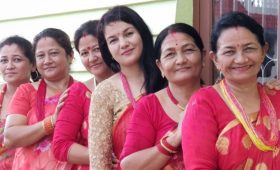