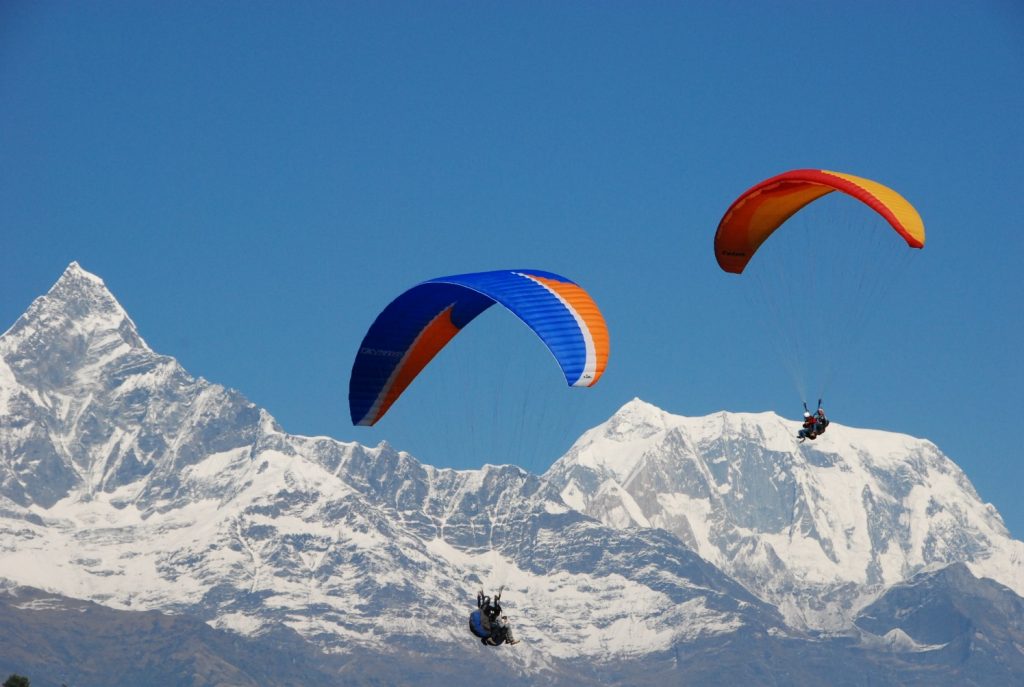 Paragliding in Pokhara is a package, in which, one gets to soar over the city of Pokhara like a bird in the sky whilst taking in the views that this lakeside city has to offer below, plus get to view the various Himalayan peaks and ranges giving you a scintillating view of them, while in a paraglide and a trained paragliding pilot doing the job of piloting you through the skies over Pokhara.
You turn ebullient when you are picked you from the point in Pokhara and the excitement begins to grow as you are driven towards, Saragkot, a village and a vantage point from where not only all paragliding trips in Pokhara are initiated but also a place where people from Pokhara and elsewhere come to view the Himalayan snow-capped peaks and the sunrise over it. You can try such a package in our (Packages name and link to it). This time, you get to view the mount peaks of Manaslu and Annapurna, while you try to calm your excitement. The time comes for you to leave earth and you do so, soaring into the skies, while the Mountain peaks you saw begin to view differently from the skies and as time goes on above in the winds, the view of Phewa Tal, the second biggest fresh white alpine lake begins to take on another dimension of splendor from the skies, where you truly begin to feel that now you can only see what a bird sees from the top, and why it is so special to have the ability of flight. You might be for about thirty minutes in the skies but would hardly feel like being three minutes because flying like a bird and what you see from the top, makes time fly. You eventually land safely to the earth beyond the Phewa Tal and with the excitement still tingling in you, picked up and driven back to your starting point in Pokhara. Now that you have got the thrills of paragliding in Pokhara, you might want to try out some more excitement in life, if it is not hiking in Nepal, then try out the one-day packages of excitement while living on the edge of safety in Bungee Jump in Kathmandu or Trishuli River Rafting.

The main thing that in the Paragliding in Pokhara trip that one gets is the ability to fly somewhat like a bird and see what is hidden from us and what a bird can see. In the true sense, Pokhara is not only the Lakeside City of Nepal, it is the most frequented city not only by tourists from abroad but from internal ones as well. The city has a lot of natural wonders to offer, this paragliding in Pokhara Nepal allows an aerial view to capture in a short span of time; 30 minutes to the most. Then the view of the snow-capped mountain peaks and ranges is even better than you would get when you last saw them from Sarangkot. Plus the short lessons, that you get before taking off and the way paragliding is handled, if you are not a pilot yourself, it sounds intriguing. The most fundamental facts of paragliding one get is flying like a bird without the means of powered propulsions to take to the sky, and being in control of your flight. And last, of all, are you being taken to the spot and being picked up, and driven back with the excitement of having flown in the blue heavens – for flying like a bird is truly one.

Is paragliding safe? What is the age limit?
Paragliding is a very safe activity, in fact, much safer than flying in a Boeing plane, where there are 100 to 1 chances of something dramatic happening on a plane of its kind than under the skills of a paragliding pilot. It is only natural, that one might feel nervous flying something without an engine to propel it. In fact, just like a paraglide canopy, and Boeing planes can glide to its destination if the airport is closer enough without any engines giving it power.

There is no such age limit for one to take this paragliding trip, in reality, people as old as ninety and more have taken to these kinds of activities. For example; the Late Ex-President, George W Bush, went sky-diving from 30 thousand feet as a Birthday gift to him. Sky-diving is a more extreme sport, it all comes down to your mental attitude to take such excitement and have a strong heart for.

You are picked at 8 am in Pokhara from you place of lodging, and driven in a private vehicle to Sarangkot, the place where the paragliding flight takes off from. You are given some time to taken in the sights from this vantage point of the surrounding snow-capped peaks. Then half an hour before ten, you are given a briefing by the pilot whom will control the flight and then the flight takes off. You will be in the air, gliding and soaring over the skies of Pokhara for about 20 to 30 minutes and eventually landed on the opposite side of Phewa Tal after all the excitement. Here, you will picked up and driven back to the point where you had been picked up. Paragliding trips usually begin at 10 am due to the wind factor
In case you would like this trip from Kathmandu, or from other destination, there will be extra charges according to the additions to making it possible, which all depends. Plus, fling could be cancelled for the day, depending on the intuition of the pilot which is re-scheduled for another day. So please have some days on hand, if you happened to be a guest in the country from elsewhere.

Expand/Close
How is paragliding in Pokhara Nepal?

Paragliding in Pokhara Nepal is one of the popular adventure activities among tourists and visitors to Pokhara. It’s a nice and quick paragliding experience done closer to Pokhara City.

Where is the Pokhara paragliding spot?

Pokhara paragliding spot is Sarangkot where you need to drive from Pokhara city for about half an hour then do the paragliding. Flights are in the morning and in the afternoon as per the seasons.

How much is Pokhara paragliding flying duration?

Pokhara paragliding flying duration is 30 minutes from take-off to landing.

How much is paragliding in pokhara price?

Paragliding in Pokhara price depends upon tandem flight, flying duration where the normal flight time is 30 minutes but can be done for an hour too. It also depends if you’re doing it on your own if you are experienced.

When is paragliding Pokhara best time?

Though Pokhara paragliding can be done round the year the best time for paragliding in Pokhara is spring (March to May) and autumn (September to November).In monsoon (Jun-Aug) isn’t recommended since the city of Pokhara receives most rainfall in Nepal so flights won’t operate.

How much is paragliding in Pokhara height?

What is the age limit for paragliding in Pokhara?

There’s no age limit for paragliding in Pokhara and people of all ages with interest in paragliding are enjoying the flight.

Which is the best paragliding company in Pokhara?

The best paragliding company in Pokhara depends upon the years they are in operation since they have long experience with many successful flights and, best and trained pilots.

How is paragliding experience in Pokhara?

Most definitely it’s one of the best adventure experiences and witnessing spectacular Himalayan views during the flight.

Is paragliding in Pokhara safe?

Paragliding in Pokhara is a safe adventure activity with well-trained pilots with years of experience in operating flight in and around the Pokhara area.

How much is the paragliding Pokhara weight limit?

Paragliding Pokhara weight limit in minimum is 15 kg and a maximum at 100 kgs.

During paragliding Pokhara what to wear?

It depends upon the season, In summer you should go for light clothes and in winter, windproof jackets and warm clothes are suggested. And your shoes need to be tight and fitting in your legs so that they won’t fall off during the flight.

Tour guide
We have a team of highly experienced and professionally trained tour para-gliding pilots who have year’s of experience.

Vehicle
We use comfortable car/mini-van for pick up and drop.

Tour duration
The tour duration is about 1-2 hours. It can be shortened upon your request.

Clothing
Clothing varies with the type of tour and season. It’s warm in Pokhara from April to October-end and from November to March-end, days are usually warm but evening colder. Summer clothes are okay during the day time but the evening requires a light jackets. Winter is from December till February so bring along sufficient winter wears like jackets, sweaters, trousers etc. Or you can purchase clothes of your choice in Pokhara clothing stores too. 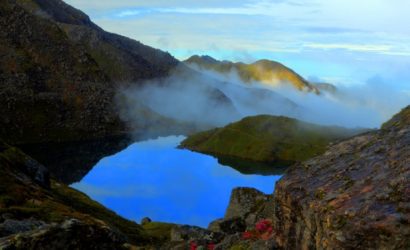 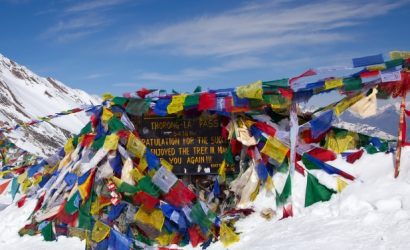 Annapurna Circuit – Fly out from Jomsom 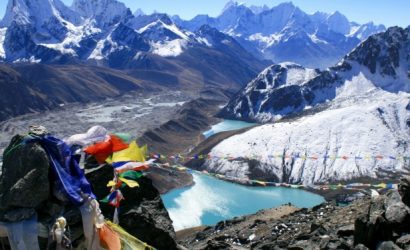 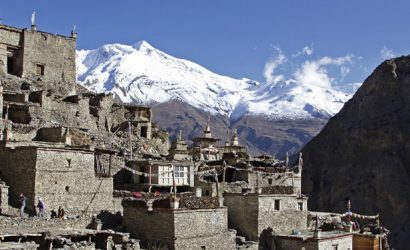 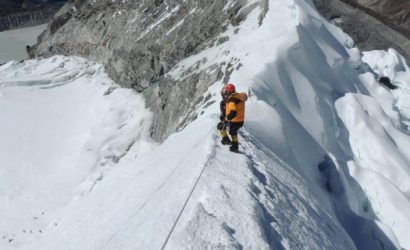 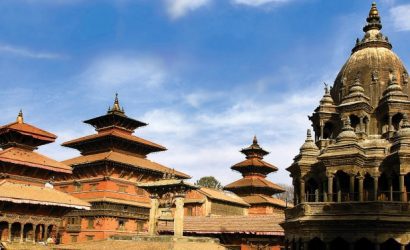