Nepal is one of the best travel destinations in the world. It’s the land of the Himalayas and also the birthplace of Lord Buddha. Nepal is the 19th best tourism destination out of 25 world’s best tourism ranked by Lonely Planet. The highest mountain in the world Mt. Everest is in Nepal where the eight highest peaks in the world are inside Nepal. Though being a small country tucked in between the two giants, India and China, Nepal has immense natural beauty with sparkling snowy mountains, green hills, rivers flowing in solitude, lakes, terraces, waterfalls, and unique culture and traditions. The country has more than 6000 rivers, 3252 glaciers, and more than 5000 beautiful lakes. Nepal is blessed with diverse cultures, traditions, ethnicity, and languages. Considering this, there are many reasons why one should visit Nepal once in a lifetime. Here we have listed some of the best reasons in no particular order to visit Nepal for your upcoming holiday.

Trekking in Nepal 2021
Trekking in Nepal is one of the most sought out activities. Some of the trekking trails like Everest Base Camp trek, Annapurna base camp trekking route are considered some of the best hike trails in the world. Nepal has more than 1301 mountain peaks over 6000 meters including eight mountains are over 8000 meters. Mt. Everest is located in Nepal where the most famous trek in the world ‘Everest Base Camp trek’ goes till the base camp of Mt. Everest. It’s a dream of any trekking enthusiasts to be at the base camp world’s highest peak ‘Mt. Everest’. With this setting, Nepal is the best destination for trekking including mountaineering at some of the world’s highest peaks. Each season, trekkers and mountaineers from around the world come to Nepal either for trekking or mountaineering. The best trek in Nepal includes Everest base camp trekking route, Annapurna base camp trekking itinerary, Annapurna circuit trekking, Ghorepani poon hill trekking, Langtang trekking route, Upper mustang trekking itinerary, Manaslu circuit trekking. Short trek in Nepal is Everest view trek Nepal, Short Annapurna base camp trekking, Mardi Himal trek, Ghorepani Ghandruk loop trek. The easiest trek in Nepal includes Langtang valley trek, the Royal trek Nepal, Poon hill trek route. Besides there are some of the best day hikes in Nepal such as Nagarkot Changunarayan day hike, Dhulikhel Namobuddha day hike, Shivapuri national park day hike, Phulchoki day hike.

Sightseeing in Nepal
Nepal has a unique culture and traditions with the prime two religions, Hindu and Buddhist, peacefully and harmoniously exits. There are thousands of Hindu temples and shrines, Buddhist monasteries and stupas scattered all over the countries. Some of these temples and monasteries date back to ancient times. UNESCO has declared some of these temples and stupas as UNESCO World Heritage Sites. Among them, seven of these UNESCO sites are inside the Kathmandu Valley. Kathmandu is often also considered as the ‘city of temples’. Sightseeing in Nepal Kathmandu is to visit these sites where ancient temples, stupas, monasteries, royal palaces are located. sightseeing in Kathmandu Nepal takes you to these Nepal UNESCO heritage sites like Kathmandu Durbar Square, Swayambhunath ‘Monkey Temple’, Pashupatinath and Boudhanath. Another most popular destination for sightseeing tour in Nepal is the beautiful lakeside town of Pokhara. Sightseeing in Nepal Pokhara takes you to the natural wonder of Pokhara visiting natural caves, serene lakes, Himalayan viewpoint. sightseeing places in Nepal also includes sightseeing in Lumbini Nepal. Lumbini is the birthplace of Lord Buddha. Every tourist season thousands of tourists and pilgrims from around the world visit Lumbini to pay homage to Lord Buddha.

Adventure sports in Nepal
With Nepal’s alluring natural surroundings, Himalayan feed rivers, lush green forests; there are many adventure tourism activities in Nepal. Adventurous activities in Nepal include several audacious activities any adventure individuals are looking for. These include bungee jump in Nepal, river rafting in Nepal, mountain biking in Nepal Kathmandu. Adventure activities in Pokhara Nepal are paragliding in Pokhara Nepal, white water rafting in Pokhara, bungee jumping in Pokhara, mountain bike in Pokhara etc. Best bungee jump in Nepal is from the Last Resort located closer to Nepal-Tibet/China Border where the trip starts/ends from Kathmandu City. Trishuli river rafting is closer to Kathmandu and is the best river rafting in Nepal and the most popular. Another popular adventure tourism in Nepal also includes jungle safari in Nepal Chitwan national park. Chitwan national park is a UNESCO World Heritage Sites and one of the finest wildlife reserves in South Asia with abundant wildlife and bird species. Chitwan jungle safari package includes elephant safari, jeep safari, jungle walk, bird watching, elephant breeding center visit, village tour cultural program. One can trace many animals and mammals during such safari like deer, monkeys, wild boar, rhinoceros, birds and if luck favors ‘the Royal Bengal Tiger’ itself. The cost of adventure sports in Nepal depends upon the types of activities you have chosen like bungee jump, rafting, jungle safari, paragliding, mountain biking etc. 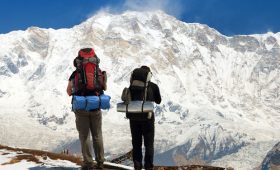 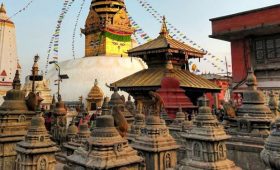